Running for City Council is a great way to serve your community.

Missed the Prospective Candidate Workshop? Check out the recording below and the slides here:

Registering as a Candidate

Note: Due to current COVID-19 protocols, you may submit your nomination papers by mail, courier or secure drop box at City Hall (105 Marina Road, Chestermere, AB T1X 1V7, Attn: Returning Officer). In addition, in person meetings with the Returning Officer or election staff are not permitted at this time. If you have any questions, contact the Returning Officer at rtofficer2021@chestermere.ca. The Returning Officer will contact candidates within a few days of submission to confirm receipt and completeness of paperwork.

Important Notes about Running for Office:

Mayor vs. Councillor: As the Mayor is an equal member of Council, information materials that refer to 'Council' or 'Members of Council' also refer to the Mayor. Once the election is over, the Mayor (Chief Elected Official (CEO)) is expected to abide by the same expectations as any other member of Council AND several additional responsibilities. More details can be found in the 2021 Chestermere Prospective Candidate Guide.

Council Salaries: As a result of the extra duties a Mayor is expected to undertake, the Mayoral position is considered a full time position and is paid differently than Councillors. Council members are considered part time and are paid accordingly. Find out about Council's current salaries here.

Financing: While each candidate may decide on his or her amount of campaigning, there are specific guidelines regarding the use of money in a campaign. All candidates must read the Local Authorities Election Act for all rules and regulations. Basic requirements include not accepting contributions until the nomination period commences, opening a bank account, and filing disclosure statements.

More details can be found in the 2021 Chestermere Prospective Candidate Guide .

After the Election all candidates must remove all election signage within 7 days. Those who were accepting campaign contributions must file a campaign disclosure statement on or before March 1, 2022 and candidates will receive back their deposit if they have been elected or obtained half the number of votes cast for the candidate elected to the office with the least number of votes.

Candidates who have been elected will receive an invitation from the Chief Administrative Officer for a meet and greet at City Hall following the election. At that time you will receive an orientation package and further instructions on what to expect for taking your oaths of office, and orientation.

More details can be found in the 2021 Chestermere Prospective Candidate Guide.

Missed the Prospective Candidate Workshop? Check out the recording below and the slides here:

For more information on the roles and responsibilities of Council members, review the following resources:

Third Party Advertisers must, in accordance with the Act, register using this form. 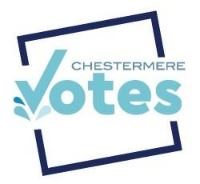