Are you looking to join the leadership of our Welcoming and Inclusive Communities (WIC) committee?

Fill out the letter of interest form here!

The goal of the WIC initiative is to create communities where all residents and visitors enjoy a sense of belonging, where diversity adds to the social and economic vibrancy of the community, and improves the quality of life for all residents.

Join us on February 26 from 6-8 p.m. in Council chambers - Register here

learn about the experiences, contributions and achievements of peoples of African ancestry.

Chestermere residents, in partnership with the City of Chestermere and The Alberta Human Rights Commission invite you to celebrate in this colourful, fun filled evening with performances, music and food.

March - stay tuned for details on the next workshop in the ’Engaging Women in Municipal Politics’ series offered by The Parity Project.

Attendees joined facilitator, Nicole Owen in part two of our conversation about empowering women to engage in municipal politics.

A conversation about empowering women to engage in municipal politics. Attendees were encouraged to share their perspectives and any current barriers they are experiencing.

A FREE Paint Night with the theme of ’Belonging’

The Dialogues for Diversity series presented: “But where are you REALLY from?” an exploration in to unconscious bias and microagressions. For more information visit the following links:

CNN.com - Where are you really from? article and VIDEO

The City of Chestermere, in partnership with Rocky View Immigrant Services, the Chestermere Foodbank and the Latinas en Chestermere group invited the community to participate in a potluck style Fall Feast.

June was Pride Month & and June 24-30 was Pride Week in Chestermere!
Our Pride Committee worked hard on some really cool community events including a film screening, discussion group and the Pride in 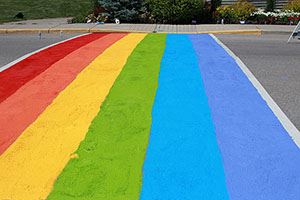 the Park event! They also recruited a bunch of volunteers to paint the crosswalks at City Hall with a couple’a rainbows!

Most often we do not understand what diversity means, or the discriminations that people in our community might be experiencing. Faces of Chestermere aims to bring awareness to Chestermere’s diversity by photographing residents faces, and displaying those photographs with statistics throughout the City.

Photo booths will displayed at special events like Canada Day and Water Festival. We invite residents to join together in publicly proclaiming their personal choices, characteristics, or beliefs and showcase that differences are not to be feared.

The following papers were prepared by Dakota Rickman, Diversity and Inclusion Intern for the City of Chestermere: